In what is possibly the best superhero film of all time, Spider-Man: Into the Spider-Verse follows Miles Morales’ hysterical, action-packed, and surprisingly heartwarming journey into becoming the friendly neighbourhood Spiderman we all know and love.

Suffice to say that Spider-Man: Into the Spider-Verse caps off the year with a bang thanks to its amazing (no pun intended) cast of web-slingers, jaw-dropping comic-book style animation, and a killer soundtrack to boot. The film opens with a familiar character in a familiar setting: a blonde Peter Parker swing around New York City. He tells us his signature backstory through a unique thematic device that never got old. It effectively introduced us to all these new characters in a succinct and entertaining manner. The opening makes the true-and-tired origin story of Spiderman fun while also throwing in some classic easter eggs from the Raimi Spiderman Trilogy. However, we quickly leave our friendly neighbourhood Spidey for a young kid in Brooklyn badly humming to Post Malone’s Sunflower. 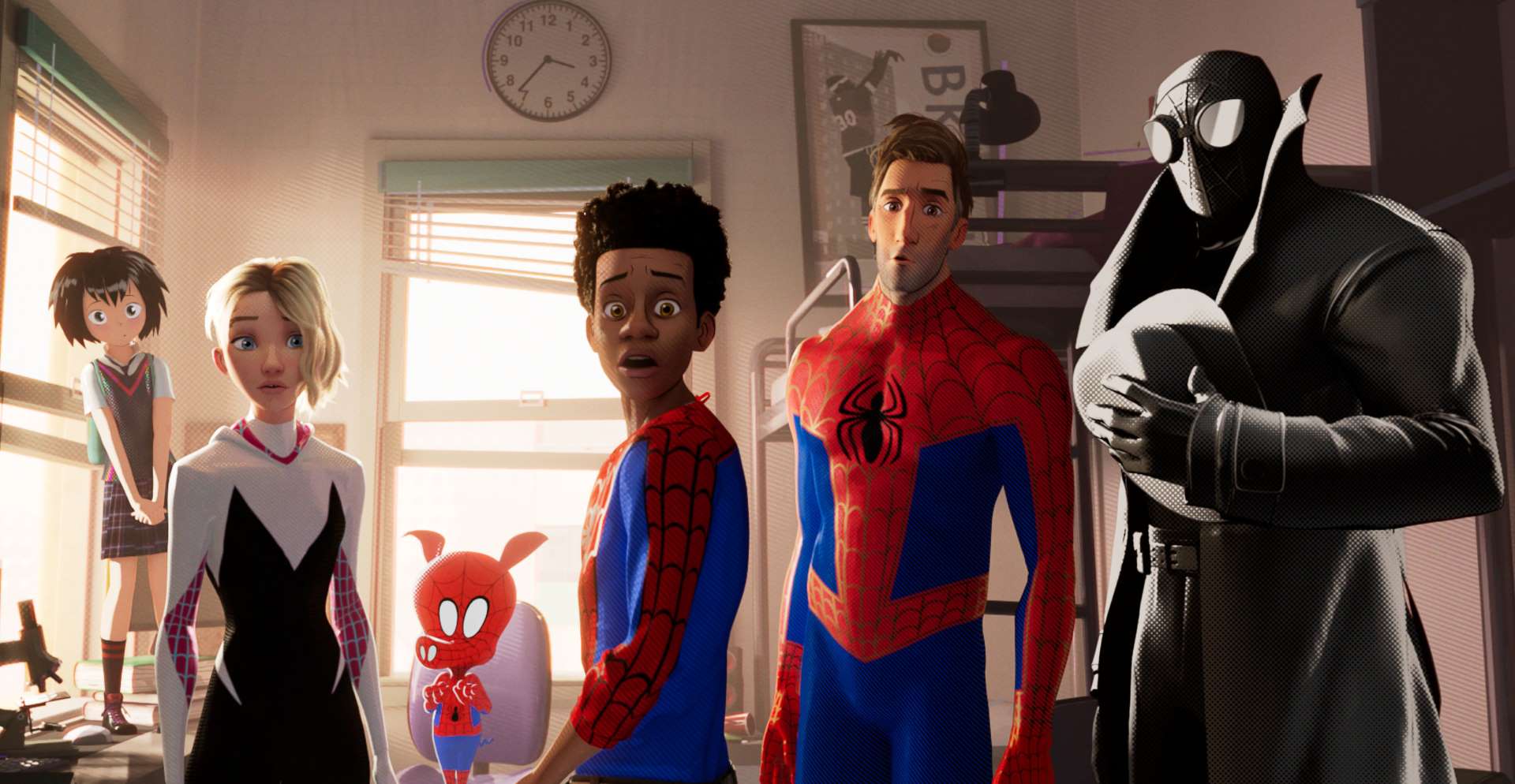 Miles Morales encapsulates the essence of Spiderman without retreading familiar ground. He struggles with personal identity and the confidence to be who he wants to be. His attempts at expression through spreading his art throughout New York are thwarted by his policeman father and the two share a loving, yet complicated relationship in this developmental time. Bogged down by his expectations to succeed, he’s resorts to spending time with his uncle, played by award winning actor Mahershala Ali. The familial drama was realistic and incredibly relatable. The pressure to fit the image your parents impose on you can be applied to any young teenager growing up.

The film hardly wastes a minute. Every scene is memorable, hilarious, and enthralling. Every joke lands, whether it’s Miles trying to cope with puberty, him figuring out his newfound powers, or his interactions with his Spiderman mentor. We’re introduced to the Spiderverse through Peter B. Parker, a schlubby version of our classic hero who is still an expert crimefighter, yet is also washed up. Joining him is Spider-Gwen who offers the next most experience and is a pleasure to watch interact with Miles as a friend, and perhaps more. The trio are the heart and soul of this film, and to top off the family, we have three multiverse visitors. Spiderman-Noir, played by Nicolas Cage, a literal black-and-white detective, Penny Parker, a poorly lip-synched anime caricature, and Peter Porker, who is a cartoon. All capable Spidermen, each offering Miles a piece of wisdom. The only one that I feared for was Porker, but fortunately, his addition wasn’t overly jarring and it even pays off in a hard hitting joke near the conclusion. The six characters each show a facet of Spiderman that is unique, yet share a common idea. Anyone can wear the mask. Anyone can be a hero. The film does an expert job at giving each character screentime and blending them together. Even when the plot slows down, I felt not an ounce of boredom because watching Miles trying and failing to flirt with Gwen, Parker and Miles growing to love each other, and Spiderman-Noir struggling to solve a Rubik’s cube had my eyes glued to the screen.

And a film is nothing without its villains. Kingpin is your classic mobster upsized. His black-suit covered physique can sometimes fill the entire frame, leaving only terrifying, scowling, bald head visible. His physical presence is menacing, perhaps a little too much to be fully three-dimensional. His motivation in this film is a tad cliche, but is still understandable for a super villain. Backing him up are interesting twists on Spiderman’s rogues gallery. An actual Green Goblin, Olivia Octavius, and a mecha Scorpion. The most frightening of all is the Prowler who is boosted by a terrifying theme that has the bass to rumble the whole theatre.

While we’ve had a slew of live action amazing, and some less so, Spiderman films, some things you can’t capture in reality. When you have the power of animation, your vision can suddenly become so much more. I have never seen an art style like this before. The world is has a varied and vivid colour palette that makes each frame pop. Animated objects are made in a lower frame rate, almost as if to simulate stop-motion of a comic panel. Depth-of-field is reinvented by duplicating the image to make it seem like you’re seeing double. All these innovative techniques created a visually stunning world that has literally brought a comic book to life.

And let’s not forget the booming soundtrack. From start-to-finish, you’re ears are blessed with twelve hits that compliment the movie. There are adrenaline pumping and hair raising anthems balanced by relaxing R&B that are perfect for night time cruising in your car. One song especially elevates a moment in the climax of the film to epic proportions, one that brought a tear to my eye.

Speaking of tears, there were several moments in this film that tugged on my heartstrings. This film is packed with fun, but has a surprising amount of heart. It doesn’t let us forget that Spiderman’s life is fundamentally filled with tragedy. Many dramatic beats resonated with me because it answered why every kid wants to be a superhero, as well as the cost of being one. And who better to remind us of what is the heart and soul of Spiderman than Stan Lee in a thoughtful and moving tribute that nearly had me blubbering.

Living Up To A Great Responsibility

To me, this is the perfect Spiderman film, and even one of the best superhero films of all time. Miles Morales, starting off as any normal kid, earns his moment to suit up and join the ranks of his Spidermen mentors by going through adversity and rising above it. He is Spiderman. Someone that would give his life for his home and family because he can. This film is a love letter to Spiderman fans everywhere thanks to its cast, its many easter eggs to different canon, and its heartfelt message.